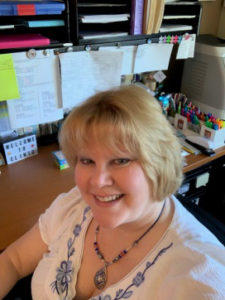 Melissa has served as the Director of Clinical Education at Truman State University for the past 28 years. In that capacity, she has supervised and placed hundreds of student clinicians as they embark upon their clinical career, often following them from senior clinicians through graduate school and on into their clinical fellowships.

In addition to all she does at Truman State, she began her leadership with MSHA as the volunteer chair for the annual Convention. From there, she co-chaired the Convention and is responsible for starting the student scholarship fund. The first fundraiser for the scholarship fund was the “MSHA Cooks” cook book that she co-created. The cook book included recipes from Missouri speech-language pathologists (SLPs) as well as from other important names in the field. After this fundraiser was the creation of a silent auction at Convention.

She went on to serve a term as MSHA vice president for professional and public relations and then as MSHA president serving two consecutive terms as past president. Following her leadership opportunities with MSHA, Melissa went on to graduate from ASHA’s inaugural class of Leadership Development and was selected to serve as the SLP representative from Missouri for the ASHA Advisory Council. She has been an ASHA SIG 11 (supervision and administration) steering committee member, the chair of the ASHA CFCC as well as a member of the ASHA Board of Ethics. She is currently serving as an ASHA CAA site visitor and chaired the topic on supervision and precepting for the 2020 ASHA Convention.

MSHA members may currently know her as the presenter from the ASHA 9 Building Blocks of Supervision training that she co-presented and has been used by thousands of SLPs as they complete their mandatory training in clinical supervision. Melissa is known for praising every SLP in the field that accepts a student for placement and thus takes a turn at paying it back to the profession. A self-proclaimed lover of “leadership and laughter” Melissa continues to give of her time and talent in so many ways. This spring Melissa was awarded the MSHA Honors of the Association for which she is both humbled and grateful. She stated, “Receiving an honor from your peers such as this means more than I can effectively put into words.”

We applaud you Melissa as the first person to be highlighted in MSHA’s new MSHA spotlight.